How Mindfulness Can Help Diabetes

Self Care this Winter

A New Home for Joy.

There are certain moments in life that stick with you. Because in that very moment what you’re experiencing carries with it something else. You can’t quite put it into words, but the feeling is so indescribable it can only be summed up as a spirit of magic. This is one of those moments.

It all started a year ago with a Special Initiative project gifted to Michelle Newcomb of Cornerstone Homes, by a request from both homeowners and the President, Roger Glover himself. She was tasked with taking the reins as she began to look for the perfect tree for the Chickahominy Falls tree lighting event. Finding the perfect tree always carries an importance and an essence of nostalgia, but this tree was different. It had to check several boxes before coming home to this unique 55+ agri-community. Where one-of-a-kind amenities and natural beauty come together to win national awards and recognition.  But even more so, it has created an idealized feeling of community that is authentic and actually exists.

“Chickahominy Falls is like no project I’ve ever been a part of, just because it is so unbelievably unique. Never in my eight-year history have I ever created the relationships like I have with the folks at Chickahominy Falls. And it was all created organically,” said Michelle. 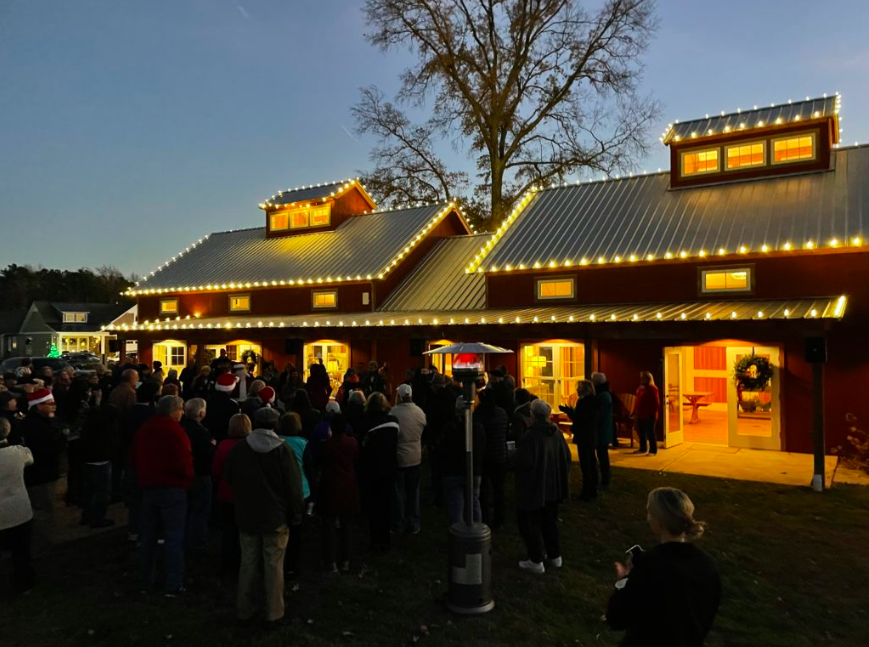 The community had been lighting The Barn year after year at holiday time, but now, with a brand-new clubhouse, it only seemed natural to move the festivities to a new and permanent spot. In keeping with the community’s focus on sustainability and with the same painstaking level of detail that has created the difference here, finding the perfect tree wasn’t going to be easy. But Michelle knew that the folks at James River Nursery would surely have just the right tree for the event coming up in just 30 days time. 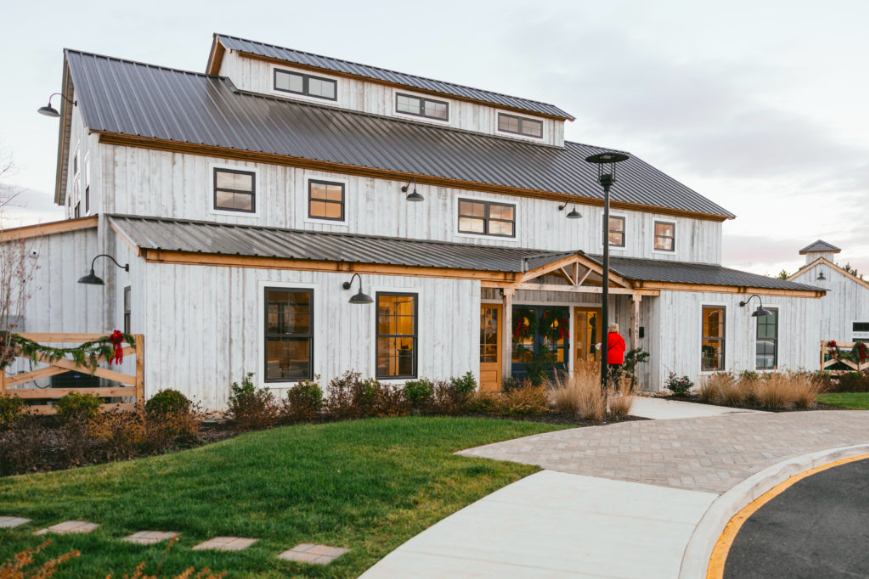 “I can’t get you that tree right now, are you crazy? Your timing is way off.” Was the answer Theresa Johnson delivered.

So, the project was tucked away, until the next year. The seasons went by, spring into summer and then when the air took on a familiar crispness again, it was just the motivation Michelle needed to reignite her search. Not wanting to get anyone’s hopes up, Michelle and Theresa were on a covert mission. This time, giving it a proper name, like all top-secret duties. And “Operation Get Lit” was on, again. 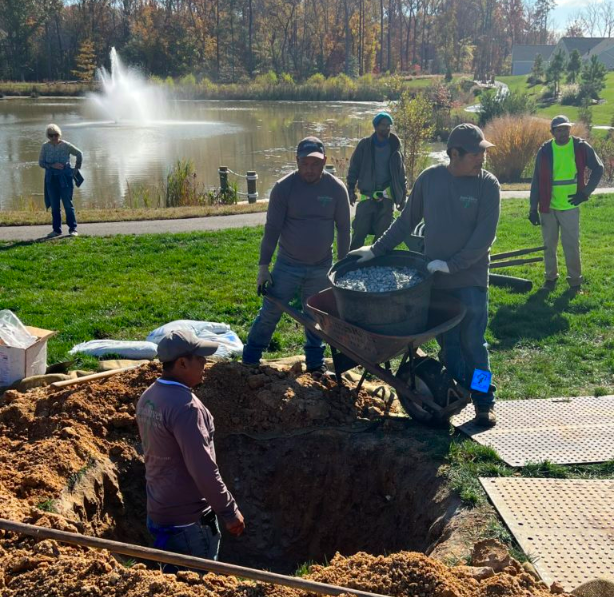 “We all had this same vision for this tree,” said Michelle. “Telepathically we just knew what we wanted for this project, again, because it was so special.”

So the pair kept searching and texting, even getting the Owner of James River Nursery himself involved. And then Michelle received the text that she had been waiting over a year to receive.

Miracles Exist. I sent you a gift today 🎅🏽

A Norwegian Spruce Tree sat in the middle of a Radford, VA nursery that was getting ready to close for good.  But fate was shining down on this tree that day and she was about to make her debut in a big way.

Like the Griswold’s walking through the forest, as Michelle described it, a team of James River Nursery employees brought out the equipment to unearth a two-ton root ball attached to a 16-foot tree, tucked it onto a flatbed truck for its final trip home.

Chickahominy Falls was ready for her. And Michelle had one more trick up her sleeve. Calling on former Head Engineer for the Rockefeller Center tree lighting, and now Chickahominy Falls resident, Charlie Cassely.

“I have a surprise. I’m so excited, but you can’t tell anybody because it’s a super-secret,” said Michelle. “Get your dream team assembled for Operation Get Lit.”

Fifteen James River Nursery members were there to help this tree put down her roots in the perfect spot, nestled right next to The Farmhouse.

“People were excited to be part of something so special. You could just feel the energy all around,” said Michelle. “And it sounds so cliché, but you realized at that moment that this was so much more than just about a tree.” 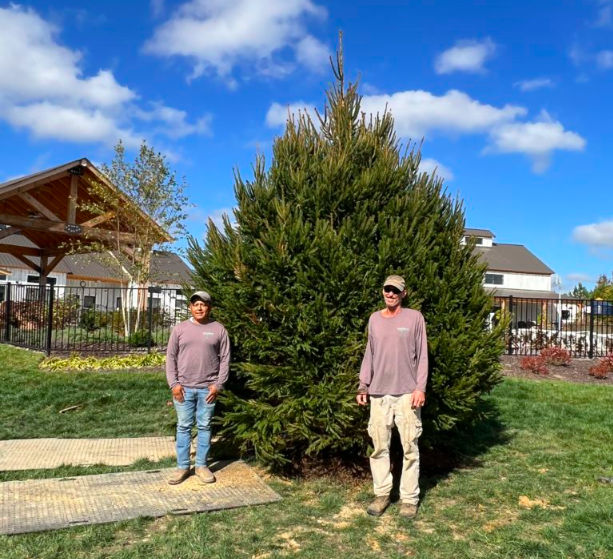 Charlie’s team then got to work wrapping 2,700 colorful twinkle lights tight, in preparation for a an event one year in the making.

Then, when the night finally arrived, the scene could have been ripped right out of a Hallmark holiday movie. As neighbors started to come together in the spirit of community, it wasn’t just the tree that was all aglow that night. 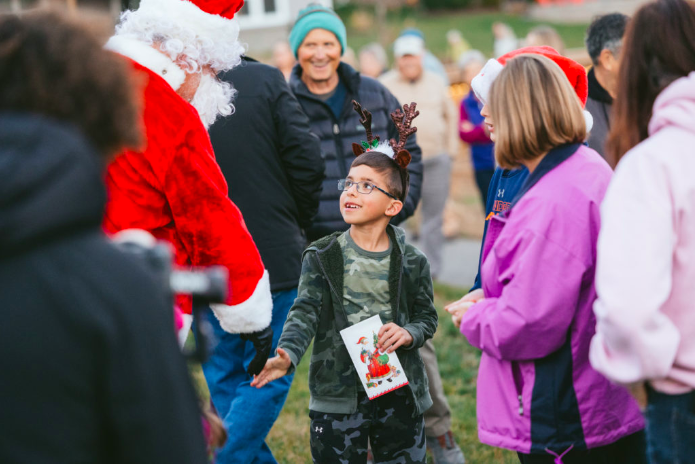 “I’m watching the sunset and I’m seeing people walk from around the pond, dressed up and with their grand kids, coming out of the farmhouse. Even some who I haven’t seen in a long time were coming out and they were all so excited about it,” said Kirsten Nease, Marketing Director for Cornerstone Homes.

Holiday music was playing, the pond was in the background and even a perfect crescent moon helped to shine a spotlight on the moment. And in the spirit of giving, the neighbors presented a holiday gift to the Farm staff members, who believe in and work so hard to grow this lifestyle built upon health and wellness. Then, with a countdown from ten and a single push of a button by Roger Glover and Santa, the tree became a true beacon of light. As a reminder of hope in all things, especially in a community that has a gift of bringing people together. 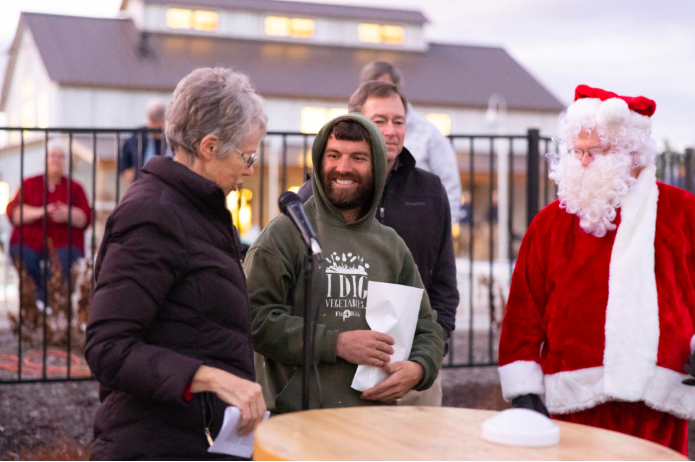 From one, simple request came a much bigger initiative, and one that seemed to be inspired from the very beginning. Running parallel paths from a Norwegian Spruce Tree to a neighborhood full of people brought together by the magnetic pull of home. Just like the spirit of the season we are in, when you really believe in something, what results is the magic, and that feeling of home.

“The event itself was such a symbol of how much time and energy we as a team of developers and builders, put into everything that we do,” said Kirsten. “And in this one moment, it was like this was exactly what we were imaging all those many years ago, of what we knew Chickahominy Falls could be.” 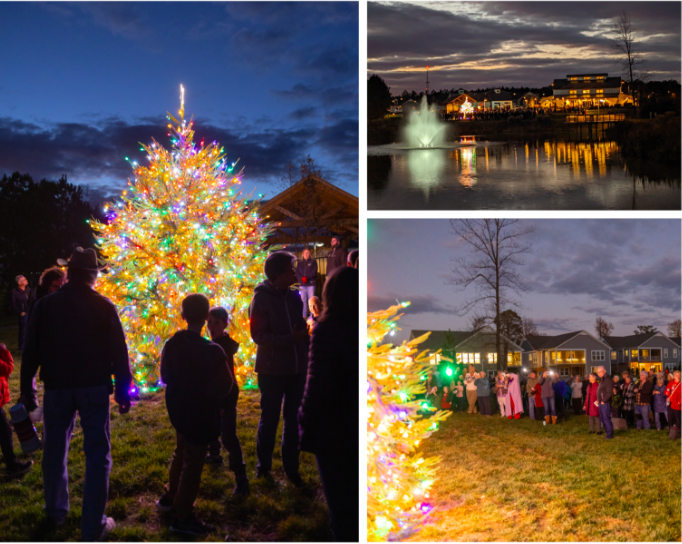